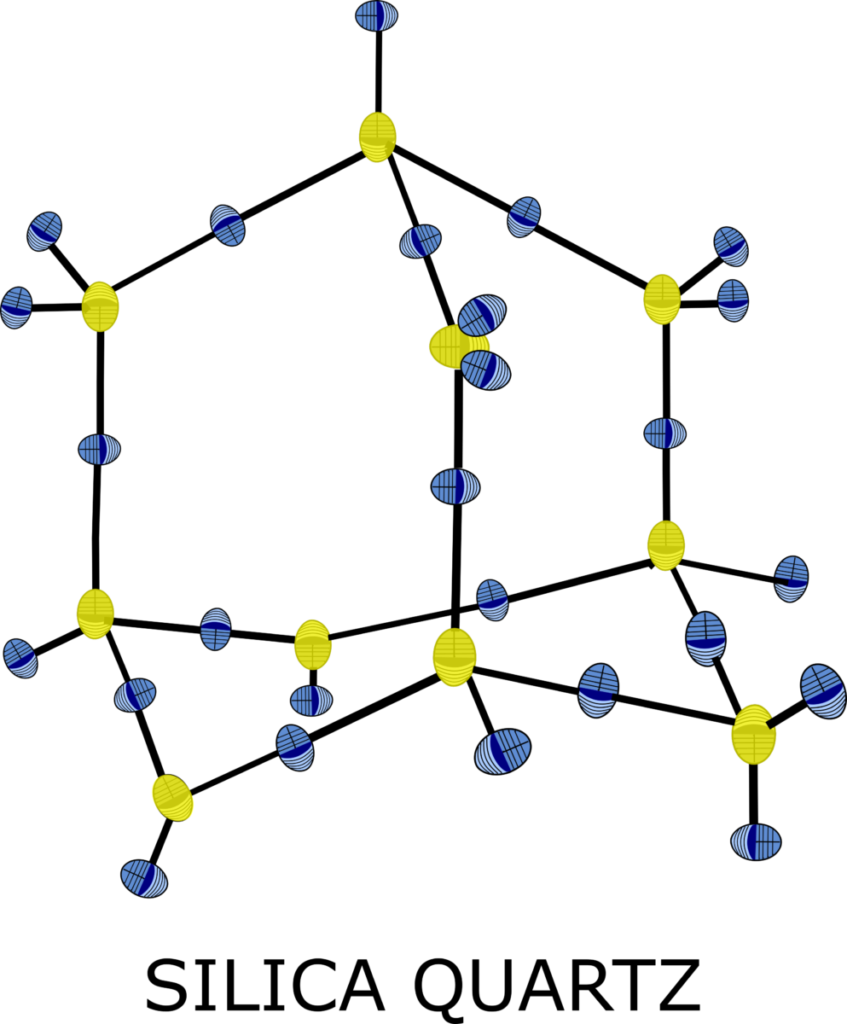 The quickest method to make a good guess as to what type of solid comes from a  formula, use the periodic table. Elements are divided into two areas: metals and nonmetals, Figure 1.

Nonmetals are pale red. When nonmetals interact with metals, they add electrons  and become negative ions.

Nonmetals also form bonds with other nonmetals through sharing electrons. This forms molecules or other times forms molecular or network solids.

Metalloids have the properties of both metals and nonmetals. This means the element behaves as both a metal which forms an ion, a metal that exists in metallic bonds, or form covalent bonds with other nonmetals.

The attraction between positive and negative charges is very strong. Ionic compounds act as solids at room temperature.

The solid however, is not held together by covalent bonds. The bulk material forms from interactions between the molecules. The interactions which bind molecules are called intermolecular interactions.

Molecules take the form of solids, liquids, or gases. Among cohesive forces which enforce the structure of solids, intermolecular forces are the weakest.

In contrast, methane, CH4, has much weaker intermolecular attractions because methane is nonpolar. When methane does become solid, it solidifies at a much lower temperature than water: 0ºC for water versus -182ºC for methane.

The reason these two molecules have such different melting points is because water molecules have much stronger intermolecular interactions than methane.

When metal elements bond to other metal elements, metal-metal bonds result. You can understand many of the physical properties you remember when you think of a ‘metal based on the way metal atoms form the bulk material you know as a metal, Figure 5.

The metal atoms (blue) sit inside a matrix of  shared valence electrons. The electrons are shown by bent red arrows. The arrows show the electrons move constantly and hop from one positive metal nuclei to another.

The background pink inside shows an overall negative charge. This allows the total charge of the metal to be neutral.

It is important not to confuse covalent molecules with a covalent network of atoms.

The basic structural unit of the silicate ion, (SiO4-4) is shown in Figure 7. The properties of various materials you know: quartz crystal, glass, and fiberglass have different properties. This happens because the way the individual silicates are arranged in space.

The structure is tetrahedral with a silicon atom in the center while oxygen atoms with a (-1) charge occupy each point of the tetrahedron.

When solids form a regular repeating structure, they solidify as crystals. If you examine a piece of quartz, you see the rock has a regular geometric shape, Figure 8.

Notice the outer walls of the crystal have a hexagonal shape. Its faces also have a clean and regular face. These types of geometric faces are only possible when there is an underlying regular structure.

The tetrahedral silicates connect with each other on the molecular level in a regular six member ring structure fused together. That builds the hexagonal structure you see when you look at a crystal, Figure 9.

Heat silicates until quartz (or more often sand) turns into a liquid. As the melt cools, you are rewarded with glass. Though glass also forms from silicate anions, because it cooled too fast to form an orderly structure, the silicates attach to each other any way they happen to find each other, Figure 10.

If you physically combine two materials on a bulk scale, the result is a composite. You may already know about fiberglass, Figure 11. The name “fiberglass” is a bit misleading. There are fibers made of glass. However the familiar structural material is made out of strands of glass fiber embedded in a plastic.

The blue cylinders represent strands of glass fibers. The gray polymer area can be made of plastics like: polyethylene, (PE), polyvinyl chloride, (PVC), or polypropylene.

The World of Solids Waits

The most important kinds of solids that make your world fall into a few types based on how a solid is organized at the microscopic level. Each category deserves a topic in its own right. However the most basic ideas makes the best place to start.

2 thoughts on “Chemistry of Solids”