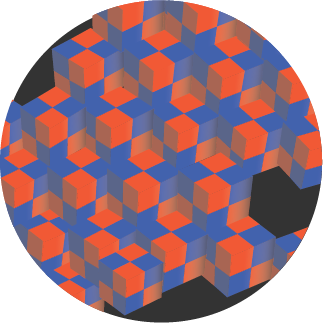 Regardless of the type of compound, the basic structure of ionic compounds derives from lattice structures already presented. How Atoms Pack. In most cases, anions occupy the lattice points, because anions are larger.  Cations occupy voids in the structure. Solid Voids. 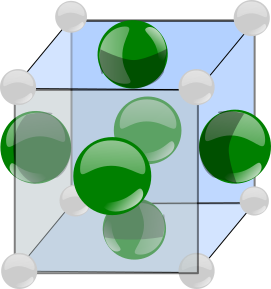 Binary ionic crystal structures contain a metal and a nonmetal. Structures occur based on the relative size of cation and anion.

These ionic compounds include all substances which have a 1:1 ratio of anions and cations. This can mean: KCl, MgO, or AlN.

The sodium chloride structure can also be seen as two interpenetrating face-centered cubes.

This structure applies to other common ionic structures like AgCl, and CsF. It also applies to ionic compounds when both the cation and anion both have the same charge and form from 1:1 stoichiometry: MgO, PbS, FeO, and TiO.

Cesium chloride shows another possible arrangement of ions, Figure 2. Given the small size of the cesium cation, it fits into an interstitial between four adjacent chloride ions.

The chloride ions forms a simple cubic structure with the cesium in the middle making the unit cell body-centered cubic.

Alternatively, the cesium chloride cells can be thought of as two mutually interwoven cubes with a corner of one cube at the center of the other cube.

CsCl is used in the purification of DNA, with its radioactive isotopes employed in cancer treatment. It finds uses in specialty electronic devices like electrically conductive glasses, activation of welding electrodes, and high temperature soldering fluxes.

Other known examples of ionic compounds that adopt this configuration include NH4Cl, CsCN, and CsSH.

Zinc sulfide can adopt one of two crystal structures: sphalerite or Wurtzite. Sphalerite is the more stable form with Wurtzite forming above 1020°C.  ZnS finds technological uses like luminescent pigments and as water splitting catalyst.

In the most common form of ZnS, sulfide (-2) anions assume a face centered cubic structure. The Zn+2 occupy half the tetrahedral interstitial sites. It can also be seen as a face-centered cube with a tetrahedron imbedded inside, Figure 3.

It shares common structure with CuCl.

When ZnS adopts its other possible structure, it adopts an alternating hexagonal structure. The anions and cations alternate in hexagonal faces with alternating Zn+2 and S-2, Figure 4.

Between the hexagonal faces the opposite ion takes a tetrahedral geometry in three sectors of the hexagon.

It can also be explained as sulfide ions adopting a hexagonal close packed structure, while zinc cations occupy half the tetrahedral holes. It can also be seen as corner shared tetrahedrons with alternating layers disposed in an opposite sense to each other.

Other ionic compounds which take a Wurtzite structure like BeO, SiC, AlN, and NH4F.

Many metal halides, oxides, and sulfides combine to form a 1:2 ration of cations to anions. These can take a variety of structures and often exhibit polymorphism: presenting more than one crystal phase.

A single metal with a (+2) charge and a metal substituent with a (-1) charge, fluorite or CaF2, serves as an example where the cation assumes the role of a face centered cubic cell. Fluoride ions take the role of filling the tetrahedral holes, Figure 5. The red spheres show Ca+2 and the blue spheres represent fluoride ions.

Alternatively, the unit cell can be regarded as a face centered cubic cell of Ca+2 with a a simple cubic cell of fluoride ions imbedded inside.

Fluorite occupies the role of the most important starting material of fluorine containing compounds. It finds use for the production of HF. For ceramic applications CaF2 is used to produce a shiny glaze. It also plays in important role as a flu additive used during the smelting of metals.

In magnesium chloride, like many other ionic crystals, the chloride ions adopt a cubic close packed structure. Magnesium cations, in order to establish the stoichiometry of 1:2, occupy half of the octahedral holes, Figure 6.

This also has an  interpretation where the corner three atoms from a cation cube overlap the corner of a cube formed from chloride anions.

This gives rise to a layered crystal structure, in which alternating layers of ions are arranged in an anti-parallel fashion, Figure 7.

Magnesium chloride has its best known use as a diet supplement which alleviates the symptoms of magnesium deficiency. The deficiencies include muscle cramps and fatigue.  It is prescribed for high blood pressure and type 2 diabetes.

Other common ionic crystals which adopt the same structure are: CdCl2, MnCl2, NbS2, and TaS2.

Titanium (IV) oxide exemplifies another common kind of ionic crystal structure, rutile and anatase. Like ZnS, TiO2 has more than one stable structure.

The majority of TiO2 finds use as an additive in pigments in:  paints, paper and food coloring. Thin films are employed as a ceramic glaze to improve surface luster. A common consumer product is as an additive in sun screen.

Titanium dioxide shows great promise as photocatalyst for generating hydrogen from water, and as a photosensitizer in solar cells.

Rutile forms a rhombohedral unit cell, which can also be seen as a distorted hexagonal structure. Oxygen occupies the the corners and the center of the unit cell. The Ti+4 ions fit into every other octahedral hole, Figure 8.

Ionic crystals of anatase are constructed from tetragonal unit cells. You can also imagine the structure as an elongated hexagon. Each kite shaped chevron connects in a perpendicular direction to its next kite shaped chevron, Figure 9.

Low valent metals often combine with nonmetals in multiple proportions dictated by the necessity of achieving an overall neutral charge.

Lithium oxide is used industrially as a starting material for lithium hydroxide and lithium carbonate.  In the ceramics industry, it used as an additive as a flux during the production of glazes.

It adopts an antifluorite structure. In this case, the O-2 ion takes a face-centered cubic structure where the Li+1 cations occupy all the tetrahedral holes.

The majority of substances which conform to a 2:3 stoichiometry include metal oxides and metal sulfides.

Alum, or aluminum oxide, has the anionic oxygen ions take a the lattice points of a hexagonal close packed structure. The Al+3 cations occupy two thirds of the octahedral holes. Each aluminum atom is surrounded with six oxygens while each oxygen is surrounded by four aluminums.

There are so many applications for alumina that it requires a separate article to discuss them all. They include but are not limited to: glass, gems, paint, catalysis, and gas purification.

There are many other examples of binary ionic crystal structures. These represent the most common time most often encountered. At least a passing knowledge of them becomes necessary to understand how defects and doping are used to exploit the properties of ionic crystals.