You can describe matter based on composition. This means you describe collections of matter based on what makes it up. The first kind of description refers to whether or not you want to describe a pure substance or mixture.

Cultivate the skill of seeing the microscopic scale of particles when you see or hear about what you observe on the scale you see in ordinary life.

Pictured above is how we see water in a glass and how we might see water if we pretend to have a magnifying glass strong enough to see individual water molecules.

The components of a pure substance can not be separated based on  their different physical properties.

Mixtures on the other hand, contain more than one pure substance. Each substance within a mixture can be identified by separate physical properties.

In Figure 1 the left column shows pure substances. In the right column you see pure substances when added together and no chemical change happens, they form a mixture.

The first mixture is an example of two compounds: water and carbon dioxide. When they add together, both still remain the same pure substance with the same physical properties. Carbon dioxide mixes with water in order to make carbonated water. You can separate the carbon dioxide from the water and find they remain unchanged.

The second example shows two elements mixed to together to form a mixture. In this case, when copper is mixed with tin in a three to one mixture, we obtain the alloy bronze.

Figure 2 shows examples of each way you might encounter an element in its wild natural habitat.

You can divide compounds into two types: ionic or molecular. The distinction between these is important. Ionic and molecular compounds differ in their physical properties because they are either molecular or ionic. 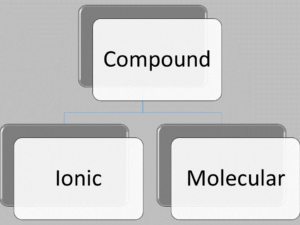 On the all important microscopic level, you find ionic compounds are stacks of ions attracted to each other by plus being attracted to minus charges. This attraction goes in all directions and repeats without stop.

In contrast, a molecular compound like carbon dioxide holds together in the bulk phase by attraction between the molecules. The bonds between the atoms: carbon to oxygen hold only the pieces of each individual molecule together.

Figure 4 shows the contrast between sodium chloride, NaCl, and carbon dioxide, CO2. The ions pack together in a hungry mass of opposite charges pressed together. Carbon dioxide has independent molecules loosely held together with weak forces between the molecules.

A mixture of more than one substance forms a mixture because it has a variable composition. This means instead of one fixed proportion of elements, you can have a sample of air which has twenty percent oxygen or fifteen percent oxygen. It still remains a mixture of air. 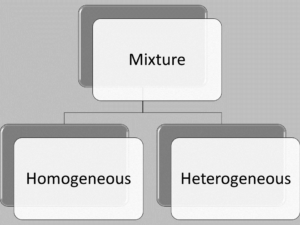 The distinction between these two states of mixture plays into how a mixture can be separated into two or more pure substances.

To visualize the difference between types of mixtures on the molecular scale, Figure 5 shows how two typical mixtures might appear.

The part of Figure 5 on the left shows an aqueous solution of sodium chloride. The chloride anions are green and the sodium cations ions are yellow. The important point to notice is that these ions are uniformly distributed through the entire solution. Every part of the mixture has an identical percentage of sodium chloride in the water.

The right side of Figure 5 shows a mixture of water and octane, (a liquid hydrocarbon). The lower layer has a clear separation between itself and the upper level. The mixture of octane and water do not have a uniform distribution.

When a mixture has a uniform distribution of every component substance, the homogeneous mixture is often a solution.

Air makes a great example where all the gases in air are equally present throughout a room. Very few people choose their seat in a class room because they are afraid part of the room has less air than any other part of the room.

You label a mixture as heterogeneous if the components jumble together and are not uniformly distributed. This means the material consists of zones and regions. This includes materials like wood, concrete, and composite materials.

When you follow a chain of questions about any substance, you will find it easy to correctly classify any lump of matter into its correct category.

Figure 6 gives a flowchart where you serially ask questions and find the correct composition of matter.

If the materiel does not have a uniform distribution, then you have a heterogeneous mixture.

If you can separate the components of a sample by physical means: distillation, filtration, chromatography; then the sample is an homogeneous mixture.

If the sample can be decomposed to other pure substances, the your substance is a compound.

If all these questions result in “no” your final remaining option is that your sample is an element.