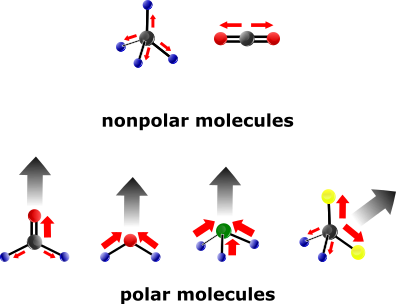 When a difference exists in relative charge between two elements, a dipole is established. One side of the dipole has a +δ and the other side has a -δ charge.

The strength of a dipole is expressed as the difference between the two poles, μ.

An arrow  shows the direction and strength of a dipole. The arrow points from positive at the base of the arrow to negative at the head of the arrow.

The length of the arrow shows the strength of the dipole. The arrows represent vectors which when added, contribute to the overall dipole present on a molecule.

When vectors oppose one another and are equal and opposite, they cancel each other out. This explains why molecules may have polar bonds, but not be polar molecules, Figure 3.

The example shows two equal dipole vectors at a right angle to each other. The result is a single vector which comes from the hypotenuse: a2 + b2 = c2.

Diatomic molecules can be either polar or nonpolar, Figure 5. If both atoms are the same, then the molecule is nonpolar, O2. Fluorine is much more electronegative than hydrogen.

Some cases can be deceptive, like carbon monoxide, CO. Oxygen is more electronegative than carbon. You might expect this means the O would have a partial negative charge while the carbon has a partial positive charge.

The situation turns more complicated with three atoms. More than one polar bond in the molecule becomes possible, Figure 6.

HCN has a central carbon with a hydrogen on one side and hydrogen on the other. Consider the C-H bond nonpolar. The remaining C-N bond has a dipole that goes from the less electronegative carbon to the more electronegative nitrogen. The molecule is polar.

In the case of two dipoles which are equal and exactly oppose each other, CO2, the two dipoles add together to leave the molecule with no overall molecular dipole. The molecule is nonpolar.

COCl2 has dipoles which all point away from the central carbon out towards the more electronegative O and Cl. You might be tempted to think this is nonpolar.

Yet when you add the two Cl, the resulting downward vector would become smaller than either of them alone. The O which opposes them over balance the two Cl‘s. This confers an overall molecular dipole that points from C to O.

BF3 acts as an example of a four atom molecule which is nonpolar. The three atoms around boron are identical, so the dipoles exert a force from a +δ on boron to -δ on each fluorine. Because the dipoles are symmetric and oppose each other, their sum is zero. This makes BF3 nonpolar.

The finally example of small molecules, are molecules which are made of five atoms, Figure 8.

In this case, the molecule all derive from the parent compound of methane, CH4. Because carbon has four H‘s attached to it which are uniformly placed around the C, the molecule is symmetric. This makes it nonpolar.

The remaining molecules in Figure 8 are all not symmetric. This means they must be polar. In the last case, CHBrClF, even though Br and Cl have very similar electronegativities, fluorine is far more electronegative than either of them. When the resulting vector sum of Cl and Br oppose fluorine, it is not strong enough to  counter act the dipole associated with F. This makes this asymmetric molecule polar.

More often you will encounter molecules which do not have just one single atom. The more common situation comes up when a molecule has multiple  atoms, each with a unique dipole, Figure 9.

The simplest amino acid, glycine, illustrates the idea. The formula for glycine is H2NCH2COOH. The carboxyl group CO2H has two polar bonds and a permanent dipole, μ. The CH2 group has no dipole moment, and is nonpolar. Further along the molecule, the NH2 group also has a permanent dipole.